I’ve done a lot of self portraits over the years and it’s always an interesting process. In my opinion, it’s impossible to be subjective about your own visage. After staring into your own eyes for hours, you become blind to it in some ways and it’s even more difficult to know whether you’re capturing a likeness or not.

second state
Since I don’t really know what I look like, I can notice myself trying to compensate in different ways as I paint. Sometimes, if I think I’m being too complimentary, I’ll make myself look ghoulish and other times I indulge the impulse to idealize.

In this case, I think that the earliest version probably looks most like me. The longer I worked on it, the more lean and well groomed I became. But, then again, maybe I’m being too hard on myself. Most of you will never know : )

When I was in college, I had an assignment to do a self portrait and then do another based on the first one but at age 60. I saved the first drawing and when I was around 35 or so I decided to do another version of that drawing every year around my birthday to see how accurate my prediction was and to record the transition. I’ve not been absolutely disciplined about doing them every year and sometimes I’ve done a different pose or medium but I have enough to get a sense of where this is going.

Here are a few, starting with the original (done when I was 20) and ending with the one I did predicting what I would look like at 60. In between are, I think, 35, 40 and 50. Some of these have that ghoulish thing going on. I think it’s pretty clear, from the drawings, that at age twenty I had a very different idea of now old 60 was than I do now at 54.

I apologize for the poor quality of some of the reproductions. 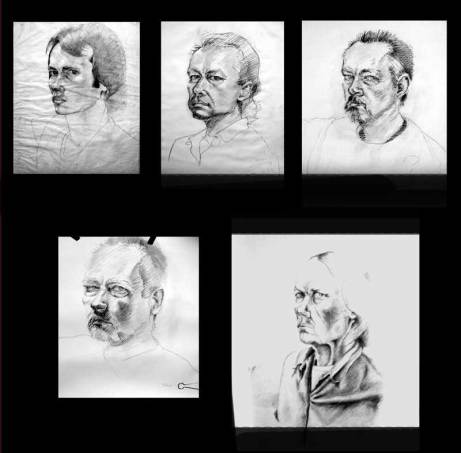 9 thoughts on “Self Portraits”